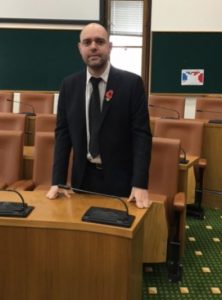 Keele scientist and local County Councillor Dave Jones has been selected as the Labour party Parliamentary Candidate for Staffordshire Moorlands. Dave lives locally with his wife, who works in our local NHS and his two children. Dave was born and raised in a council house, within a working-class family in a small mining community. He started off working in factory and then a call centre, before going to university to complete his undergraduate and post-graduate studies. After working in the NHS for several years Dave moved to Keele where he runs a research laboratory that seeks identify new treatments for disorders such Parkinson’s and Alzhiemer’s Disease.
“It’s an honour to be selected as the Labour Parliamentary candidate for Staffordshire Moorlands. As a former NHS worker and professional scientist, I can provide a fresh start for the Moorlands, and give the country an MP who has a history of employment outside of politics. I pledge to put the Moorlands first, to ensure that our issues are raised in parliament and give the people of the Moorlands a representative that will work with and for them.”

A former NHS employee himself, Dave will be leading the fight against the Tories national agenda of continual cuts to public services which has put our community hospitals at risk of closure and left our schools facing threadbare budgets.

“For all their national rhetoric, the Tories are weak on protecting our public services. They are devastating the public services that the last Labour Government worked hard to provide and bolster. Over the next few years Health and Social Care spending across Staffordshire will be cut by £500million under the new Sustainability and Transformation Partnership (STP), the first casualty of these cuts being the 384 community beds across North Staffordshire, including those at Leek Hospital. But this is just the start. Under the Tories, our proud NHS will crumble into privatisation and ever tiered provision via health insurance.”

Dave has recently campaigned across North Staffordshire on the issue of imminent cuts to school budgets because of the Tory ‘Fair Funding’ formula.

“Because of the ‘fair funding’ formula, an attempt by this Tory government to create a tiered education system. Children from wealthy areas can gain access to excellent, well-funded, education, whilst schools across the UK are receiving devastating budget cuts to pick up the bill. Devastatingly, schools across Staffordshire are set to face an £40 million cut to their budgets, around £368 per pupil and equivalent to a loss of 1055 teachers. I firmly believe that provision of excellent education to all children is the bed-rock of social mobility, and a necessary step for future generations to realise their aspirational potential.”

Over the next few weeks Dave will be pressing Karen Bradley on her commitment to the Moorlands, and how Labour will reverse the seven years of neglect since she has been our MP.

“I will speak out against the actions of the Tory government to support the wealthy, whilst everyone else suffers at their expense. I will fight valiantly on every doorstep to protect our NHS against privatisation, to defend the role of local government in our education system, to ensure a secure and fairly paid provision of employment, and to rebalance our economy to ensure a fairer distribution of wealth. I will expose the lack of representation of our communities and ensure that the people of Moorlands know they have the opportunity to elect an MP that will stand up for them and their issues.”